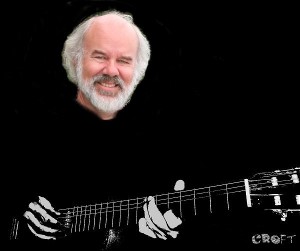 This work is licensed by its author, Gary William Croft, under a
Creative Commons Attribution-ShareAlike 3.0 Unported License.

"Arithmetic has a very great and elevating effect ..." – Plato


"Arithmetic can be a gateway drug for mathematics." – Paul Lockhart, Arithmetic, 2017


"Might poets and visual artists consider searching in the real world outside the range of ordinary dreams for unexplored dimensions, depth, and meaning?" – Edward O. Wilson, The Meaning of Human Existence

Gary Croft (not to be confused with the British football star and actor) is an American research arithmetician. For more than three decades Croft has pursued the secret of prime numbers, seeking the beauty one would expect of a sequence deemed for two millennia to be fundamental, powerful, and mysterious.

Ignorance being the mother of necessity (call it profound ignorance), Croft has approached mathematics like a Goethean scientist and engaged directly with numbers in a hermeneutic circle (or should we say spiral?). As he puts it, "Self-taught? No. Number-taught would be more accurate. Almost everything I know about numbers I learned from numbers." Theoretical physicist David Bohm might have been describing Croft's modus operandi when he said "If we are to develop new concepts we need to be like children, forming concepts from scratch and not rely on concepts we were taught." Speaking of theoretical physics, Croft only half-jokingly likens himself to a particle accelerator crashing mathematical objects together to expose hidden pattern and structure.

Croft's numeracy lessons involved thousands of experimental trials, plenty of detours and dead ends, and the occasional "Eureka!" You might say that this website is a collection of the latter culled over decades. What makes this math unique is that it was produced employing only the four fundamental operations of arithmetic: addition, subtraction, multiplication and division, along with the occasional extraction of roots, a modicum of exponentiation and some elementary geometry. Restricting the experimental and analytical tools in this way helped ensure the relative simplicity and universal accessibility of the results, i.e. you don't have to possess higher math skills to grock any content on this site. The glowing testimonials Croft receives on a regular basis from around the globe suggest his efforts have been successful. Here's one example (excerpted from an email dated 08.27.20):

"I found your website 'Prime Numbers Demystified' by accident on the Cambridge University's Primes + and I am astounded by your insight and revelation of the Prime Numbers. You have managed that which many great mathematicians before you have missed. Looking at Prime Numbers myself I found the same symmetry, but 27 years later. You have also gone into remarkable detail looking at every angle of Prime Numbers. I feel very fortunate to be able to write to you and to offer you my deep felt congratulations on a unique and successful accomplishment. With friendly greetings, J.K., Vienna, Austria."

Regardless, like a chess player never losing sight of the object of the game, i.e., to checkmate the opponent's king, virtually all of Croft's experiments were designed to shed light on the distribution of prime numbers.

Croft first made his Prime Spiral Sieve 'public' in July, 1993, when he presented it to City University math instructor Mark Wahl while attending his class "Mathematics: Its Meaning, Mystery and Methods" (July/August, 1993). Mr. Wahl, who authored A Mathematical Mystery Tour: Higher-Thinking Math Tasks was intrigued enough by Croft's 8-dimensional / modulo 30 spiral sieve that accounted for all prime numbers greater than 5 that he made copies for his records. More than a quarter century later, it turns out that the algorithm transcends its exceptional efficiency (in fact, the fastest of its kind), by serving as a deeply illuminating gateway to a beautiful and mysterious universe of number patterns and geometric symmetries that provide deep insight into the distribution of prime numbers, et alia.

Croft currently resides on beautiful Whidbey Island, appropriately in the little unincorporated town of Freeland (originally established as a commune), where he lives on a hill looking down on his soul place, Holmes Harbor.

[Note from the author: Special thanks to my son Adam Eaton Croft. Well educated in mathematics and Goethean science, he has graciously served as my shadow consultant and first responder to my work. Here's a link to his paper published in the International Journal of Innovation and Sustainable Development, Inderscience Enterprises Ltd, vol. 2(3/4): "We comprehend that which comprehends us: an exploration of hermeneutic Gaia".]

For samples of the art of Gary Croft (aka Hemi Boso), click here: hemiboso.com.

For a short story published by Gary Croft on Aphelion, the Webzine of Science Fiction and Fantasy, click here: Stencil.

For periodic updates on new material added to this site, Croft publishes notices on LinkedIn under his name and on Twitter with the handle @SpiralingPrimes.